I realize Hallows Eve a night for creatures from a far and Vampires rise from beneath the earth, big monsters to tiny cute ones are upon us and not to mention American Football Season, Sundays’ an all day event, Monday Night Football, and Thursday Night Football, Saturdays’ Are College Football games, so we might expect fewer views. It will happen. Don’t panic.

I want to show everyone and those that are not taking advantage of having your work shared that Janice and I are doing for you. I do the Reddit and Janice does the StumbleUpon.  Now, I did take some initiative/liberty on my own and shared two posts on StumbleUpon. I wanted a record or rather to show proof evidence if you will, to show you. 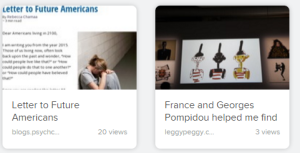 One comes from Peggy her Blog Where to next?  The posting that I shared on StumbleUpon is France and Georges Pompidou helped me find a way to love modern art. That one got three views so far.

The second one is Rebecca’s her Blog is A journey with you A life with Schizophonia and her post, Letter to Future Americans looks like Rebecca wrote one hell of an article, that one got 20 views.

Here’s an idea, the next time you’re out on Halloween with that friend that can be annoying at times, convince them to do this.

Thought I would write a small fast post of we had for dinner last night as I watched the beginning of the Dever Broncos game. Deb saw a BK commercial during the morning hours promoting their Halloween Whopper that has a black bun that is infused with A1 sauce.

One funny note: As the girl was ringing the order up, I noticed on the cash register the abbreviation for this Halloween Whopper was Halo. I immediately thought of Microsoft’s Halo Game, I softly mentioned this to Deb and the young girl got slightly confused for a second and added something else to our order.

Breakdown:
Pros:
Was good yet weird to see a black bun.
The flavor very tasty yet different when it came to the bun.
The bun tasted like Pumpernickel or some other type of Rye bread.

The official description:
The sandwich is described as:

Cons:
The only thing crunchy on mine was the onions.
While most of us remember fond memories of eating certain candies in our youth that turned our tunges a certain color, as an adult it may produce other emotions.
Deb’s bottom teeth turned a slight dingy dense light black grayish color while mine being made of plastic left a deeper color easily seen. After a little time had passed, I started to get an after-taste from my top plate.

FRONA'S READS OR ELSE
The Bold Mom

Simple, evidence-based tools to help you reach your goals