Lately, I have been spending my time working on my family tree and as most of you may know the well dries up from time to time. I recently located a second cousin residing in Spring, Texas whom gave some wonderful treasures that I never knew existed. Talk about excitement. I also found a distant cousin living in Piedras Negras that emailed me some photos that belong to her Mother’s cousin that lives in Monclova, Mexico. The lady informed me I have an open invitation to visit her. Exciting!

When it comes to the research, we find records, hopefully some photos that get placed on hard drives or flash drives perhaps in a specific folder or spread across different directories that just might become hard to find if we forgot which folder we put it in. The stack of printed paper that is scattered across our desks. I started to think that there has to be away to organize the information for faster access that is located on our personal computers.

I spent the last few days working on a program that would do just that. granted it is still in the design phase and I would like your thoughts, your input.

This is the main screen concept.

in a new window.

So let me know your thought.

This is my great grandfather Alfonso rios Gonzalez with his daughters taken in 1917 possible Farmersville, Texas since they were on the 1920 census record for that area.

I have read several articles on this subject. Some are consistent to a point while others stray.  I also know that most of us wish to hide certain facts or truths that occurred or not.  Perhaps, there is something that we do that we rather not have our peers know about us.

In my own opinion, the facts that should be kept and recorded or events that took place. Old elementary school records with class photos that our housed safely. Granted most of us may not have that glamor photo in elementary school, yet it was taken and is part of our history some -know not how to laugh at themselves. 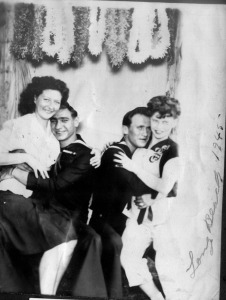 Any and all obituary records, stories that were written down, service records and photos if they are available. I must admit doing my research on my family, most photos are hard to come by let alone finding a living relative that would part with them for a while to have them copied. Digital copies are the norm today, but there is something about the old film photos that you hold in your hand.

For example, I have this photo of my Dad who is on the left with a brunette sitting on his lap, I also have a newspaper clipping that mentioned his name, the ship’s name, the area that he was from and describing where the Carrier was during this time period. They go together. 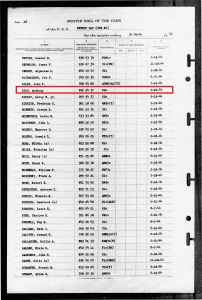 I might also want to put my Dads Muster Roll along with this if I were making a Genealogical photo album. I highlighted the area in red on the Muster Roll displaying my Dad’s record and I was able to collect information that he was promoted to Seaman Second Class during this time frame.

Stories are hard for some yet they don’t have to be lengthy tell all kind of story either. For instance, I could rattle on and on because I know a great deal about this man, not all mind you-but enough, but that would be information overload. So, instead of putting everything down, (granted you will want everything that can be remembered for your own records for your family), but for a Blog, a general family history that is shared to the world, you would not want to overload the viewer.

For my Dad, I would simply put this. Antonio Jesus Rios born to Cresencia Reza and Jesus Rios, born on June 13, 1926 in Farmersville, Texas. Joined the Army, lied about his age to be with his friend and was kicked out. Later joined the Navy. moved up the ranks and spent 12 years serving his country. He was a lady’s man and has 8 known children. After the navy, he drove tractor trailers for a living, taking the summers off to raise his three boys (me and my brothers).

There is a short paragraph that highlights key elements, we got his parents, he tried to join the army to be with his friend but was later on kicked out. We got joining the Navy, spent twelve years in the service-moved up the ranks, he was a seasonal truck driver so that he could be with his kids during the summers. Then we have the reference of lady’s man which depicts a person that liked the female persuasion and got around. We get the good and a little bad.

So here is my 8th grade grad pic. I am the sexy one!

FRONA'S READS OR ELSE
The Bold Mom

Simple, evidence-based tools to help you reach your goals