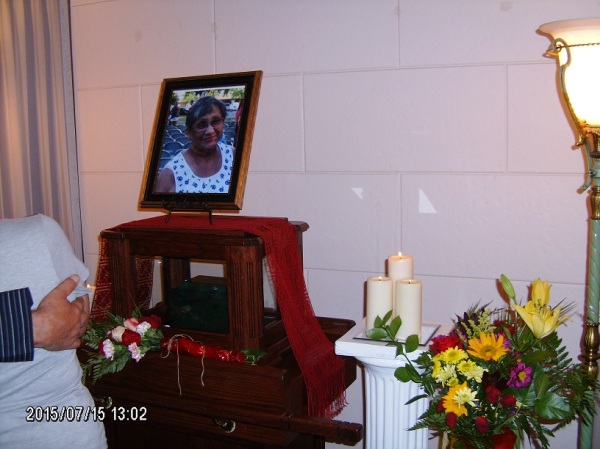 Those who read my blog, will know that I recently left Sioux Falls, SD to attend a funeral in California. As I mentioned before, Sheila was my paternal first cousin and my Dad’s favorite niece. Those of us who were raised or around her were blessed in everyway for knowing her.  I created a virtual memorial at Find A Grave so that she will never be forgotten and so that other relatives who were not able to attend may find the virtual memorial. For those who do not know what Find A Grave is – here is the definition: [Find A Grave is a commercial website that allows the public to access and add to an online database of cemetery records.]

Sheila, whom I addressed as Aunt, was a strong willed individual. At birth, I remember my Dad telling me she was born premature and very tiny. I was reminded while in California that her nickname was Inky for she was in an incubator for a month or two before coming home. They used a dresser drawer to place Sheila in and that became her bed for awhile. She survived and became a person whom we cherished. Later on in the early 90’s Sheila suffered a major heart attack and she was not expected to live long after that, yet she did. Hit with another ailment, she was not expected to survive more than three months, yet she did. Sheila was a fighter to the end. May we grow our own strength of survival from her.

During my stay in California with my cousins, the day before the services I was fortunate to have finally met my first cousin Karin and her Mother my Aunt Patricia whom I have never met before. This side of the family comes from my Mother. Patricia is my Mother’s sister. The visit lasted for about an hour and it was a very good visit despite the nerves of visiting with a part of your family that you thought would never happen. We caught up on the regular stuff that most would and talked about what my Mother told me about growing up in the Bradford house and compared notes per say.

I must admit I was taken by surprise when I saw them face to face, for cousin Karin has the same hair color as my Mother. When I heard Aunt Patricia speak, the tone and the manner was the same as my Mothers.   Stay tuned for part 2 of this posting 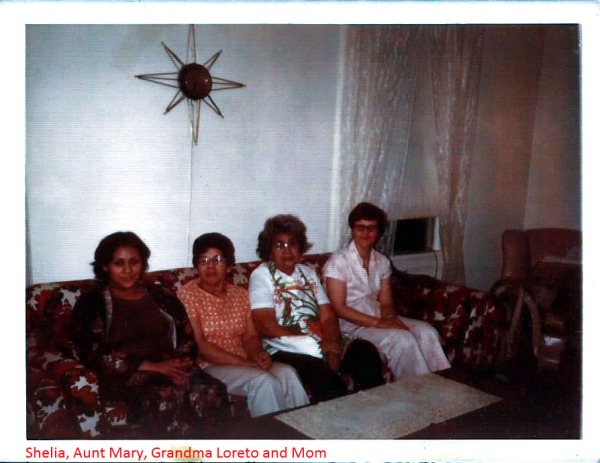 I am very grateful that I received my first donation using Gofundme, still along way to go.

Although it is hope against hope, I am staying positive that this will happen so that I might pay my respects, share stories and reminisce the loss.

If you haven’t heard, Delta has a contest for free airfare, I entered that as well for they will announce the winner by the 12th of this month.

Here is the link going to their facebook page:

While, I am on the topic of airfare, Southwest Airlines is offering airfare as low as $73.00. This will not help me but maybe one of you can use the deal.

Here’s the link for Southwest Airlines:

The below photo is a generation photo of Moms. Left to right. Aunt Sheila, her Mother Mary (Aunt Mary),  Her Grandmother as well as mine, Grandma Loreto taken in Colusa, Ca.

Here’s the scoop,
I just received word that services for my Aunt Sheila will be on the 15th of this month in Colusa, California.
I am trying to raise money so that I can attend the funeral. The current airfare from Sioux Falls Sd is $873.00
The average cost to drive there and back-basing fuel at three dollars per gallon and a car getting twenty seven miles per gallon would cost $400.00 on the low side.
25 h (1,717.1 mi) via I-90 W and I-80 W: Sioux Falls, SD to Williams, California by car.

I created a gofundme page at http://www.gofundme.com/yzck6p4

Any help would be appreciated. Thank you sincerely.
Here is the Obituary notice:

Obituary for Patricia Sheila Reister
Patricia “Sheila” Reister passed away July 6, 2015 at Colusa Regional Medical Center at the age of 69. She was born on November 5, 1945 in Colusa. She was a lifelong Colusa County resident.
Sheila worked as a cook at Colusa Regional Medical Center for over 10 years and Travelers Inn for several years. She enjoyed playing Bingo and cooking.
Sheila is survived by her children Bill Reister of New Hampshire, Bob Reister (Linda) of Los Banos, CA, Sonia (Russ) Wilson of Phoenix, AZ, Ed (Cyndy) Reister of Colusa, CA, Toni (Tom) Ballestero of Peoria, AZ. Brothers Rick Wilmoth of Colusa, CA, Clyde Loreto of Fresno. 19 Grandchildren and 38 Great Grandchildren. She was preceded in death by her brother Jonny Loreto and her Mother Mary Wilmoth.
A celebration of Sheila’s life will be held at 10:00a.m. Wednesday July 15th at the McNary-Moore Chapel 107 5th Street Colusa. Private burial will be held at a later date.
Memorial contributions may be made in Patricia Sheila Reister’s name to the Colusa Regional Medical Center Foundation 199 E. Webster Street Colusa, CA 95932

Yesterday, I received news, news that most do not like to hear or face, similar to being a parent and getting that one to three AM call regarding one of your children.

Even though, we knew what would transpire, the bricks crumble down crushing your windpipe and breaking the water valve–It still hurts even though you know it will happen. 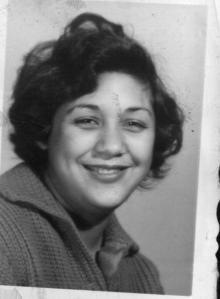 , California, we called her Aunt Sheila. Sheila was my Dad’s favorite niece.  Sheila is my first cousin but out of respect due to our ages as children we were told to address her as Aunt Sheila–and we did so.

Sheila was a person that would drop what she was doing to aid her family. My brothers and I were small meaning needing to be supervised. My mother rest her soul had a gallbladder surgery in the late 70’s when the use of laparoscope was not approved until 1988 in the USA. My Dad asked if Sheila could watch us while Dad had Mom in the hospital and he at work driving tractor trailers. She did so bringing along her daughter Toni my first cousin once removed to help her in some degree.  Aunt Sheila not only just watched us but also took care of all the house shores while my Mother was in the hospital. A person dedicated to family.

My first experience eating Menudo was one evening at her house in Williams, Ca that was made with Tripe, my cousin Bob told me it was from the lining of the cow’s stomach-as my nose went up in the air, but it was good.

Some say that a photo is worth a thousand words, this cliche I believe for this one photo says a lot.  I will miss You Aunt Sheila. You will not be forgotten.

I only hope that I can make to it your funeral to be with family at this time.

Looking for horror? ...Come in.