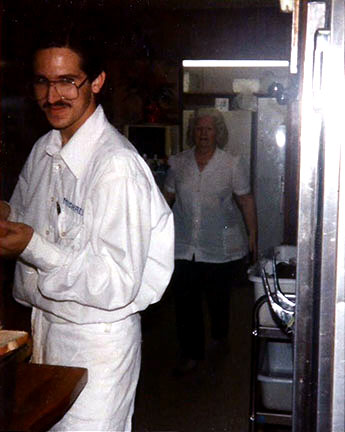 We get to a certain age in life, and we reflect on the rising cost of food products among other things. Who would have thought that what was once inexpensive to make is no longer the case. Eggs, for the most part have risen due to Avian flu. Less chickens = less eggs.

I think the image to the left makes a fair statement as to how some of us feel with the rising cost of food products as well as the fuel jumping up which also contributes to the rise in food products. The consumer is taking a licking.

Ok, I am done with my rant.

I thought I would share a recent meal that I cooked the other night. Most everyone, has their own spin on recreating a dish whether it be a recipe handed down or one that we found via the Internet. The most common meal of the day for this particular recipe would be breakfast. But who says you can’t have breakfast for dinner. Today I will show you my spin on the Potato and egg burrito.

Potatoes, I used four of them cut into bite size

Onion Salt, my better half does not like onions

Red Bell pepper (Use an amount you want to use)

Green Bell Pepper (Use an amount you want to use)

First, I start by putting Vegetable oil in a large frying pan, about two caps full maybe three. To be honest with you, I never measure, I judge it by eye. Let the pan heat up on medium heat if using an electric stove. Once the pan is heated, add the potatoes and be careful not to get splashed by the oil. Then add a pinch or two of salt and the same amount of black pepper. Next, add about two to three shakes evenly of the garlic salt, now the onion salt-about two shakes. Place a lid over the pan and let it cook for about three to five minutes. Remove lid and use a spatula to turn the potatoes over. When you remove the lid you should get the aroma of the spices hitting your nose. What a delight!

Once the potatoes are turned over, add the bell peppers. Ok, now we want the bells to caramelize but not burnt. Place the lid back on for about two to three minutes and then remove the lid. Turn the potatoes over. Once you see that the potatoes are browning and the bells starting to caramelize is when I added the cilantro. I then placed the lid for about two to three minutes. Remove the lid. At this time I added the eggs. Now, about the eggs. I know some will grab a bowl and scramble the eggs then proceed to add that to the potatoes. I don’t and never have or will when it comes to this recipe. You may do so if you wish, but you’d be robbing yourself of the flavor that you get by doing it this way.

Now for the photos: 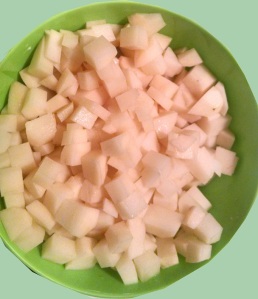 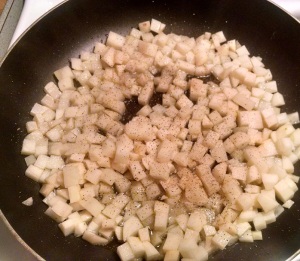 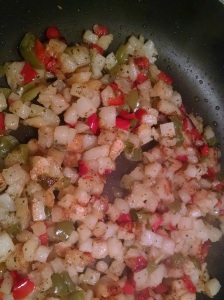 The cheese is optional. Fold in a tortilla and enjoy!

If any one found this interesting or just plain liked it, then please give me a like or leave me a comment.